Wrestling people in the know, know that Tom Giaramita has been one of the most impactful and influential people in the history of Long Island wrestling.

The Blue Wave Wrestling Club became the feeder system for John Glenn High School and despite its size, barely having enough students to qualify as a D1 school, John Glenn has been a dominate force in Section XI wrestling since 2008, capturing three Section XI Tournament Championships and four runner-up finishes over that time span.

John Glenn’s success has been a team effort as TJ Brocking has done a fantastic job coaching John Glenn HS and is a major reason for their success.

There is a saying when investing, to watch where the smart money invests.

With the success of Blue Wave and the inherent success of John Glenn, well, people noticed.

And their success had a lot to do with having Blue Wave as their model.

But I attest to you one thing.

When Tom’s son, Joe won a Section XI Title in 2011 and was 3rd in NYS @ 189 pounds, it was decided that Joe would attend SUNY Cortland. A Division III school.

Where he would become a 4x All-American and National Champion. 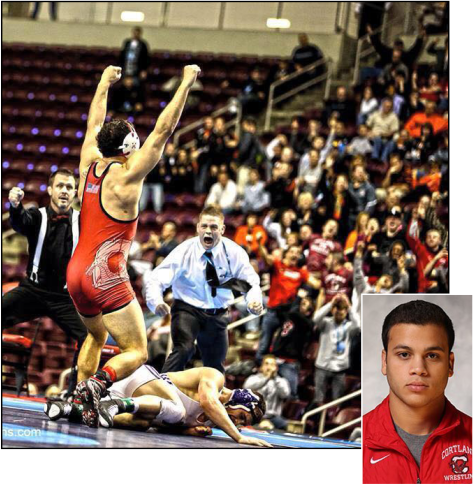 I have heard that so many times.

I have even said it myself more times than I care to say.

If you are in the process of saying that now – I beg you to listen.

I implore you to open your mind, to understand, to explore.

To do what is right for you, which is to find the right fit for yourself, regardless of division.

“Surround yourself with great people, that is the key to success,” we have all been told that many times in our lives.

I am here to tell you when a Brad Bruhn from Cortland or a Jon Egan from Roger Williams, or a Lonnie Morris from Johnson and Wales or a Shaun Lally from Muhlenberg or a Dean Zenie from Mount St. Vincent or a Joe Patrovich from LIU Post comes calling inquiring about your services to wrestle for their DII or DIII programs, to listen.

They are good people.

Listen to what they have to offer and introspect the reasons you are wrestling.

If you hate losing and love figuring out how to win against a worthy opponent who has beaten you prior; if you love being part of something bigger than yourself; if you love the person you are when you are in training striving to be the best version of yourself that you can be – then you love wrestling.

“There are no scholarships in D3, why would I want to go there?”

I don’t believe anywhere in the above paragraph of what you loved about wrestling, money was ever mentioned.

If you love money, get a job.

If you love to wrestle, wrestle.

In my opinion, the main goal should not be to get a scholarship or receive money.

It is very difficult to wrestle with money in your pockets.

The main goal in picking a program should be having an opportunity to compete while surrounding yourself with great people.

My point is, if you find yourself saying, “I only want to wrestle D1,” or “D3 doesn’t offer any money, why would I want to wrestle there?” then your mindset needs to be adjusted because it is that mindset which is reducing the opportunities to compete while surrounding yourself with great people.

And that should be the ultimate goal.

“Watch where the smart money invests.”

I believe when all is said and done, when the people watching the smart money finally figure it out, Tom Giaramita’s biggest impact on Long Island wrestling can be seen by what I believe was his ultimate goal.

To give his son an opportunity to compete while surrounding him with great people, regardless of money.

Capturing the People and Culture of the Greatest Sport on Earth.

Be Incapable of Discouragement

It Has to Hurt