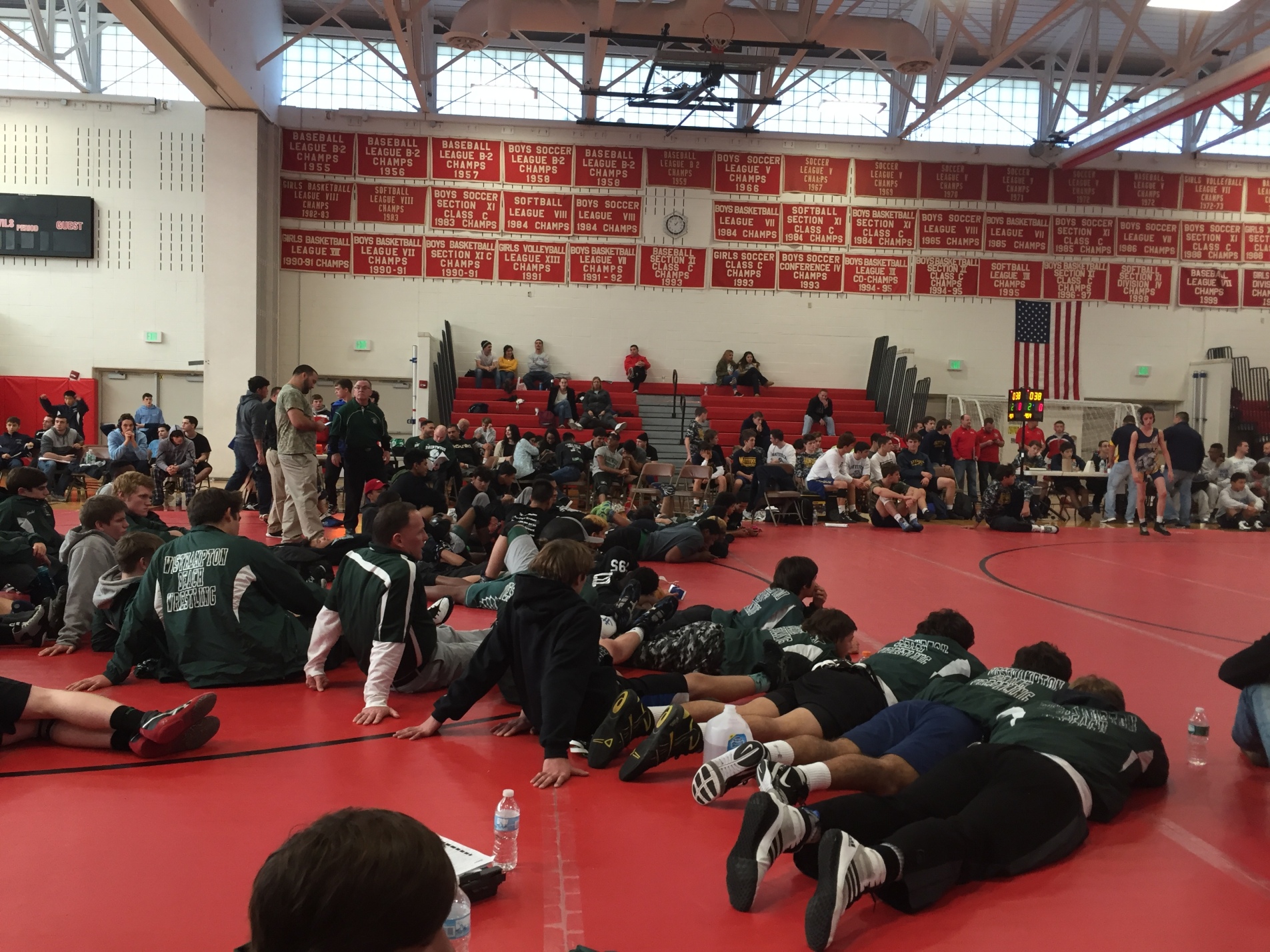 There is always one match a tournament when everyone takes notice.

Crowds form around the mat.

An electric atmosphere spreads throughout the gym as the everyone wants to know what is going on.

When you see one of these matches, you know it.

It is the reason you sit through twelve hours of dual meets over two days.

It is the reason you miss the football game on t.v., the reason you carve out two hours in your life to make the trip across the island to be in attendance.

It is what made Elmo dress up for Lauden Swain’s match against Shoot.

It is what the sport is all about.

Competition at its best – one which requires both opponents to be at their best.

When “not winning” isn’t “losing” for either competitor.

Mattituck vs. Rocky Point was that one match this weekend at the Center Moriches Duals.

It is a testament to both programs.

As I watched the match a few thoughts came to mind.

Darren Goldstein does a tremendous job surrounding himself with quality coaching talent. On this day Rocky Point had Anthony Volpe and Billy Coggins in their corner.  In the past it has been Steve Hrmada or Charlie Griffin. There is no wonder how Rocky Point stays at the top of Section XI for all these years. Hard work combined with very talented coaching.

What impressed me the most about Mattituck was not their wrestling, which was absolutely impressive, but their body language.

The same occurred when one of their wrestlers saved a team point by only losing 7-0, instead of 8-0.

Mattituck’s ability to go out and wrestle a strong Brentwood squad right after their 33-27 non-win to RP showed their maturity.  There was no let down in what could have been a classic trap match in performance right after an emotional non-win. It would have been very easy for them to come out flat.  They did not.

I have seen 14 of Mattituck’s matches this year, there is no doubt in my mind Mattituck will have more than a few state place winners this year and that Jack Bokina will improve on his 4th place finish from last year. It wouldn’t surprise me at all if he were to get his hand raised at 6:00 pm on Saturday February 27th, 2016. He looked that good.

Mattituck’s athletic upper weights allow them to compete with any team in Section XI and NYS.

I am sure Rocky Point @ Hauppauge – January 20th, 2016 will be another match that will attract crowds and the attendance of Section XI’s faithful.

I will be there.

Because I appreciate the pursuit of excellence.

And the Arrival of excellence.

Subscribe to this blog and get a FREE GIFT

Be Incapable of Discouragement

The Reward That You Seek

You Must Beat ALL of Your Opponents