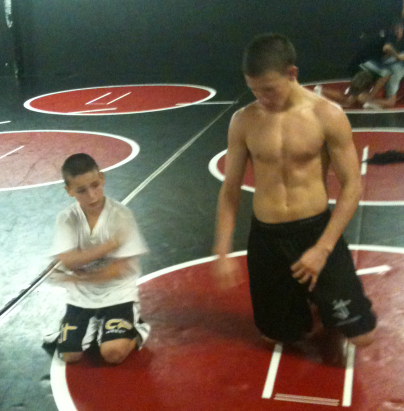 It was a grueling practice – in a hot basement wrestling room – in the middle of the summer.

You know the place – the place where champions are made.

In this case, the place where fourteen dedicated Razor Elite wrestlers came to train on this night, to push themselves and to push their partners to levels that they didn’t know ever existed.

These fourteen wrestlers do this religiously twice a week, above and beyond whatever other workouts, private lessons or weight training they may be doing “on the side” to get better.

They ignore all the reasons they shouldn’t be working out together:

“They might be in the same league”, “They could meet in the counties”, “I don’t want anyone to get to know my style.”

They do it anyway, because they know they can never get to where they want to be by training by themselves.

They embrace a belief system that says “Iron Sharpens Iron”, and “To be the best, you have to work out with the best.”

So they come down and they train.

They train to make themselves better and to make their workout partners better.

But on this one particular night, there was just a little extra juice in the air.

The throws were just a little harder.

The take downs were just a little fiercer.

The breaks were just a little shorter.

The intensity was definitely stepped up a notch.

There were bodies flying across the room, hard wrestling being done everywhere you looked.

There were wrestlers willing to put their bodies into walls before giving up a take down.

Each wrestler pushing his partner to limits that neither thought he had.

Ninety minutes of intense live go’s, that would have made Jeff Jordan proud.

After practice was complete, you heard more than one dad say, “Man they went at it tonight.”

No one would have said a word if all of the wrestlers just wanted to go home and go to bed.

But no – that’s not what makes champions.

What makes champions is being around others who have the same championship mentality as you do.

Wrestlers who have the same goals that you have.

Wrestlers who will push you to the finish line.

Even after a hard workout.

Especially after a hard workout.

The push could come from anywhere.

On this day it came from 5th grader Jake Silverstein.

On this day Jake was the guy who set the bar.

After practice, as everyone wiped down, dried off and headed to the scales to weigh themselves, there was this seventy-eight pounder in the corner quietly doing a few extra sets of pushups by himself.

He didn’t say a word – he was just pumping out hard pushups – one after another – doing each and every one the right way – elbows locked on the way up, chest to the floor on the way down, head up.

This went on for a few minutes while the other wrestlers were packing up.

As each Razor Elite wrestler dried off and got weighed, one by one each of them caught Jake out of the corner of their eye and came back onto the mats to join him.

The bar was set.

“How many are you doing?”

And down went the high school wrestlers.

Without hesitation, 200 “extra” push ups turned into 2800 in total as all fourteen wrestlers joined in.

You see, a champion can’t ignore the challenge of a push – that’s what makes him a champion.

On this day, Jake Silverstein was the guy who set the bar.

In the next practice it will be someone else.

That is the reason you surround yourself with as many champions as you can.

So you will be pushed.

Especially after you thought you had already pushed yourself to the max.

Champions embrace the challenge of the push from another champion.

That is what makes them great.

Subscribe to this blog and get a FREE GIFT